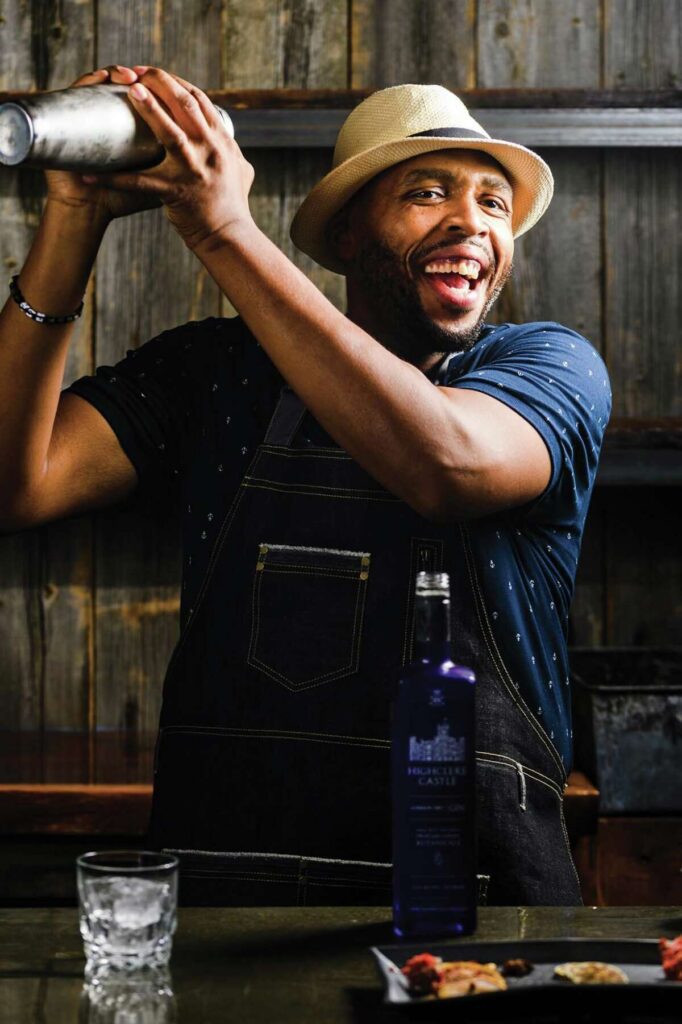 The Queen’s Jubilee, a jubilee in heaven our entire Highclere world is in a mode of reflection, mourning and celebration: the longest serving monarch in British history has reached her sunset having lived a full and magnanimous life. I never got the honor of an audience with Her Majesty, but I feel us kindredly connected via cocktails. Its through cocktails that we are able to travel through time and space. We can build a castle right in our glass. Today, we present the story of the Queen’s favorite cocktail and a primer on some alternate versions that are lovely to make at home.

What was Queen Elizabeth’s favorite cocktail?
It has been widely reported and verified that the Queen enjoys a Dubonnet and gin for her pre-lunch quaffing; two parts Dubonnet, one part gin, a slice of lemon shaken and strained into a Nick and Nora or cordial glass, is the consensus signature cocktail of Her Majesty.

…but what on earth is Dubonnet?

Dubonnet is a slightly sweet, fortified wine (wine that has been strengthened with a spirit) that’s blended with fruits, herbs and spices. Like most apertifs, the exact recipe is a closely guarded secret, but a few signature ingredients are black tea, dark berries and the all-important quinine. Its creation in 1846 was an effort by the French government to promote consumption of this anti- malarial ingredient (we’ve heard this story before with the gin and tonic) and the blend became popular for pleasure consumption among Cafe Society at the dawn of the 20th Century.

The cocktail was given the Highclere Castle treatment to honor the Queen’s Platinum Jubilee Celebration. The addition Champagne makes a lovely sparkling version that has become a favorite of guests at our gin tastings and events. Any fan of a spritz style cocktail is sure to fall in love!

The Peril of Popularity

Dubonnet’s Royal relationship goes back to the Queen Mother, and it’s improved formula was given Royal Warrant by Elizabeth II in 2021. This resulted in what I call a “run on the bottle shop” as fans of Her Majesty stockpiled their reserves of the now precious liquid. The American Producer has been unable to keep up and its availability is somewhat now limited. Do purchase a bottle if you find one!

For an alternate version, I experimented with Lillet Rose (another famous wine fortified with quinine and fruit liqueurs) as a substitute and it worked quite well!

The Surrogate Jubilee- for use when Dubonnet is Elusive
1.5 ounces Highclere Castle Gin
1 ounce Lillet Rose
2 lemon slices
3 ounces Cava
Pour ingredients over ice. Give a bit of a rough stir, just enough to break up the lemon a bit.
Strain contents into a Burgundy wine glass. Garnish with a lemon wheel

One thought on “The Queen’s Favorite Cocktail”

This website uses cookies to improve your experience while you navigate through the website. Out of these, the cookies that are categorized as necessary are stored on your browser as they are essential for the working of basic functionalities of the website. We also use third-party cookies that help us analyze and understand how you use this website. These cookies will be stored in your browser only with your consent. You also have the option to opt-out of these cookies. But opting out of some of these cookies may affect your browsing experience. Learn more about this cookie policy.
Necessary Always Enabled
Necessary cookies are absolutely essential for the website to function properly. These cookies ensure basic functionalities and security features of the website, anonymously.
Functional
Functional cookies help to perform certain functionalities like sharing the content of the website on social media platforms, collect feedbacks, and other third-party features.
Performance
Performance cookies are used to understand and analyze the key performance indexes of the website which helps in delivering a better user experience for the visitors.
Analytics
Analytical cookies are used to understand how visitors interact with the website. These cookies help provide information on metrics the number of visitors, bounce rate, traffic source, etc.
Advertisement
Advertisement cookies are used to provide visitors with relevant ads and marketing campaigns. These cookies track visitors across websites and collect information to provide customized ads.
Others
Other uncategorized cookies are those that are being analyzed and have not been classified into a category as yet.
SAVE & ACCEPT
Menu
BUY NOW
BUY NOW
Menu
BUY NOW
BUY NOW